What is Causal Factors 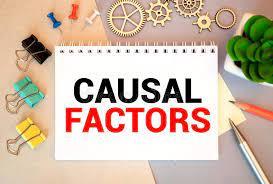 Some studies have suggested that the average business professional spends 3 hours every week solving work-related problems! Problem-solving may unfold differently depending on the industry, or even the department you work in. But most of us will agree that before you can fix any issue, you need to be clear on what it is, why it’s happening, and what your ideal long-term solution will achieve.

Understanding both the nature and the cause of a problem is the only way to figure out which actions will help you resolve it.

The causal factor is considered to be “contributing to a result without which the result could not have occurred.” In this article, we learn how a causal factor can affect a process/product, how it is different from the root cause and what are the possible questions to ask so that it can be avoided/minimized.

Complaint (clause 3.9.3): Expression of dissatisfaction made to an organization related to its product or service or the complaints handling process itself where a response or resolution is explicitly or implicitly expected.

Corrective Action (Cl 3.12.2): Action to eliminate the cause of nonconformity and to prevent reoccurrence.

Causality: It is a cause-and-effect relationship, i.e., a relationship between two events where one causes the other. One event is thus the cause and the other the effect. The cause is shown before the effect.

The term “Causal Factor” came from the System Safety Development Center in Idaho Falls, Idaho. It was part of an investigation tool called “Events and Causal Factors Charting.”

A major unplanned, unintended contributor to an incident (a negative event or undesirable condition), that if eliminated would have either prevented the occurrence of the incident or reduced its severity or frequency. Also known as a critical causal factor or contributing cause.

Causal Factors are NOT root causes – they are the ‘Root Cause Analysis’ starting point!!

How Causal Factor is different from the Root Cause?

Root Cause: It is a fundamental reason for the occurrence of a problem or event

The root cause is the primary driver of the event, and causal factors are secondary or tertiary drivers.

How to identify Causal Factors?

Effect: Material damage as the vehicle took the route where the road condition was bad

Intervening Factor: How to reach the customer location on time

Possible questions to ask to reduce/avoid:

This is the 150th article of this Quality Management series. Every weekend, you will find useful information that will make your Management System journey Productive. Please share it with your colleagues too.

In the words of Albert Einstein, “The important thing is never to stop questioning.” I invite you to ask anything about the above subject. Questions and answers are the lifeblood of learning, and we are all learning. I will answer all questions to the best of my ability and promise to keep personal information confidential.

Your genuine feedback and response are extremely valuable. Please suggest topics for the coming weeks.