Difference Between Regard and Respect 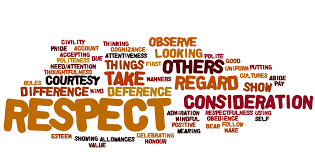 Once there was a rich-looking lady, makeup on and well-dressed waiting outside the grocery store. Then there comes a lady who seems poor by her looks, she noticed the lady standing outside and asked her.

“is that Martha? Hey,” the poor woman asked.

The rich woman looked confused and tried to remember her. “Oh, hey”. “oh, I haven’t seen you since you moved out of the neighbourhood.”

“yeah, we fell on some hard times but you know we managed. anyway, how’s your son?” the second lady replied.

The rich woman started to build a great image of her son. ” I’m so proud of him. He’s perfect. He graduated from Stanford with honours. He’s so successful. Where did your son go to college?”

“Oh, no, my son doesn’t have his own business, he works for a company.”

the Rich mom answered, ” That’s too bad. Well, my son will be here any minute to pick me up and take me to his house in the hills. Where does your son live? ”

At that very moment, the poor mom’s son arrived. and said sorry for coming late and asked her to hand over the baggage. She hands him the bags and asked him to wait for a while in the car until she says goodbye to her old friend.

The poor mom turns towards the rich mom and explains ” My son didn’t go to college because I had gotten sick and he decided to stay back and take care of me. I begged him to go to school but he refused to leave my side.”

” And my son didn’t start his own business because he works for a non-profit company. To him, It’s not about how much money he makes but instead about the difference that he can make in other people’s lives. ”

“He doesn’t have a house in the hills. He lives with me since my husband passed. he doesn’t want to live with me alone so he stayed.”

he stopped her in between and said, ” I don’t care If you’re sorry, you are wasting my time. let’s go. ”

The poor man looked at her and said ” At least, my son knows how to help his mom. It was nice to meet you.”

Contrary to popular belief, regard and respect are different.

Respect is internal. It’s the feeling and vibration radiated for who the person is. Respect is an attitude and feeling towards a person. It is not related to position, status or age. It’s our vision for others. We can show respect to anyone, irrespective of, who he is. It depends on our parameters to respect people. Respect is for the being, for who we are. Respect is the foundation of our relationships.

Example: With parents, we do not ask ‘do you love me or not as it is there.

Key Difference Between Regard and Respect

The ‘Regard’ is situational; the ‘Respect’ is consistent

The ‘Regards’ varies with the person; the ‘Respect’ remains the same for all

Why ‘Regard’ is more prevalent than ‘Respect’?

In society, people are happier by just displaying their kind gestures irrespective of what is going on internally in their minds. Since the majority of the people do like that, it is considered a norm. Like when we meet someone after a long time, as a courtesy, we do say that ‘why don’t you come to our house for dinner and the obvious response is oh yes, very soon.’ Both parties know the real truth behind the invitation and acceptance of the invitation. But interestingly, everyone behaves as if they are serious about it!

Interestingly, the majority of us pray to the god out of fear and not out of respect, as a part of the tradition and not because we believe in the god, maybe because it can give a good impression to others that you are God-fearing and not because you trust in the power of the God.

If ‘Regard’ is bad in comparison to ‘Respect’?

There is nothing wrong with giving ‘regard’ to anyone. Today if we are not able to do anything from the heart and we are doing it at the surface level, it is still better than not doing it. But when we continue to give respect to someone at a superficial level, then our relationship will never flourish. Technically, we may be ticking all the boxes to give us comfort that I did everything right but the results will always be temporary.

Why Respect is more important than Regard

Generally, we always say that these days nobody values relationships. But why does it happen? The root cause is that the vibrations that we are creating and sending to others are superficial. These days even the purest relationship of parent and child, brother and sister, husband and wife are not sacrosanct!

When we pass on the purest vibrations to the other person, the relationship strengthens.

How to Change from ‘Regard’ to  ‘Respect’?

We can easily convert ‘Regard’ to ‘Respect.’ When a relative comes to our home unexpectedly and we have already taken our lunch. Now, rather than offering food to a relative only out of courtesy, we can genuinely offer them food the way we will do it for the child.

If we cannot say ‘no’ to the guest for the lunch, there are two possibilities, either we will make the food for the guest with the negative feeling or we can do the same thing with the right feeling and thoughts. It is better to not offer the food rather than prepare the food while cribbing about it.

“Respect is how to treat everyone, not just those you want to impress.” Richard Branson